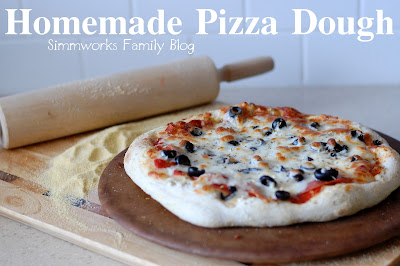 Making pizza dough at home is easy and cost-effective. For a fraction of the price of pre-made doughs in the store, you can make enough dough for two people all in the comfort of your own home.

Now don’t let the yeast throw you off or intimidate you. Once you start playing around with yeast it can be rather fun! Think of it as a science experiment.

You can make the dough one of a few ways. I prefer to make it in my bread machine but a stand mixer with a dough hook can work equally as well.

In the stand mixer:

In the bowl of a standing electric mixer fitted with a dough hook, combine the yeast and warm water; stir gently to dissolve. Let the mixture stand until the yeast starts to foam, about 5 to 10 minutes.

Turn the mixer on low and add the salt and 2 tablespoons of olive oil. Add the flour, a little at a time, mixing at the lowest speed until all the flour has been incorporated. Then add the minced garlic and herbs.

When the dough starts to come together, increase the speed to medium; stop the machine periodically to scrape the dough off the hook. Mix until the dough gathers into a ball, this should take about 5 minutes.

Turn the dough out onto a lightly floured surface and fold it over itself a few times; kneading until it’s smooth and elastic. Form the dough into a round ball and place in a lightly oiled bowl. Cover with a damp kitchen towel and let it rise in a warm spot (like the oven) until doubled in size, about 1 hour.

Once the dough has risen and doubled in size, turn it onto a lightly floured work space. Divide the dough in half and cover and let rest on the counter for 10 minutes before rolling out. This would be a great time to preheat the oven and pizza stone.

Roll out as directed in the your favorite pizza recipe.

In the bread pan of an electric bread machine, combine (in this order) the warm water, olive oil, salt, flour and yeast.

Set the machine for Pizza Dough according to the manufacturer’s instructions and process through the cycle.

Transfer the dough to a lightly floured work surface.

Punch down the dough and divide in half. Form each half into a ball and cover with a clean kitchen towel. Let the dough rise in a warm place (like the oven) until doubled in size, about 40 minutes.

Roll out as directed in the your favorite pizza recipe. 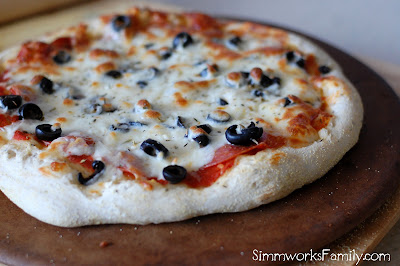 10 Cute Cats Guaranteed To Brighten Up Your Day